apologies. The photos on this blog entry are all sideways or upside down. I don't know why. I have tried to do what Fangirl did for me last time but it hasn't worked so I am feeling frustrated. Figured if I don't get them up tonight its going to be another week and I am trying to be posting more regularly... trying and failing. So... hope you don't get a cricked neck looking at them

Have you caught the Disappearing Pinwheel craze that has been sweeping the internet? The quilters that I follow on Twitter were all a buzz with it. Its a video tutorial on YouTube produced by the Missouri Quilt Company. A bunch of the twilters (tweeting quilters) that I follow on Twitter decided to have a sew in on the Martin Luther King Day holiday in the US and sew this new block/quilt. My fellow twilters are mostly from the US alhtough I think there could be a Canadian or two amongst them. As far as I am aware I am the token Aussie :) At my local patchwork group that week our president came in very excited about this new block that she had seen and which she was keen to teach us all about. Yes it was the Disappearing Pinwheel. I have also seen reference to it on one of the facebook groups I belong to. How could I resist. I decided to make my Disappearing Pinwheel quilt as a gift for a new baby born to a lovely couple at church so would only need to make 16 of the blocks. Well I only made 16 blocks but with the sashing I added and borders... its a big quilt for a baby but no doubt she will grow into it. (the Disappearing Pinwheels come in two variations. I chose to use the churn dash one shown here)


All the fabric I used in the top came from my stash. 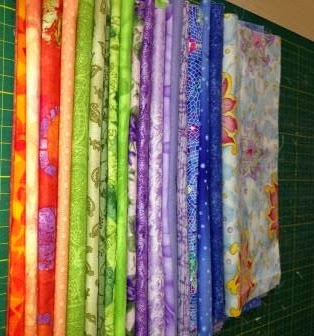 For my neutral I used white. I had heaps of pre-loved white fabric by way of sheets, pillowcases etc some of which came from my aunt's estate. I got a real sense of satisfaction in using the fabric I had been working hard at sorting and cutting. So good to be able to just go and pull out what I needed.

I also decided to put the pinwheels around the side, as in the tutorial. Again I was able to use 5" squares that I had precut myself in the previous weeks. Again it was so satisfying to be able to do that.


I haven't finished yet. I have the top put together but still working on the pinwheel borders

I had one finish this week. I completed my quilt for my great nephew Lucas. It used a panel I bought a couple of years ago which I put together with some half square triangle blocks.

I also got another baby quilt top finished for another friend's baby. Top only so far but that is a start. I still have to make the backing for it before going any further.

I completed the 5k running program I was doing. My final run was for 35 minutes and I ran 3.88 kms. Yesterday I ran for 40 minutes and was really looking forward to seeing how far I had run but my phone went flat on me so I am not sure exactly but I did run for over 4 kms so that was a milestone for me. I have lost some weight too which is very pleasing. I am now consistently below 94. Have been down to 92.3 but that was after my big run so dehydrated but this morning I was 93 which is good.

We are off to Sydney this weekend - DH, youngest son S and I. We are going to a family reunion where we will celebrate the 70th birthday of my oldest sister and my cousin. I will be able to give my cousin the Tie Quilt that I made for him using some ties of his fathers (and lots of others that I collected from family, friends and op shops)

Posted by ozzypip at 9:13 PM No comments:

Had been thinking about writing a blog for a few months now and decided to have a go and came on to the computer to find that I already have one. Now I remember I was going to write one when I went overseas in 2010 with daughter Fangirlstitches and oldest son G. I wrote one blog before I left and that was it. Oh well never mind. I wonder if I can keep it up any longer this time. With my record probably not.

Its now January 2014. Earlier this month I signed up for the 365project. When you are supposed to put up a photo a day. I got one up. Then I also saw this thing about getting your stuff in order and the starter project was to tidy for 15 minutes every day and to throw out 15 things and donate 15 things every day for the month. I managed it twice... but not on 2 consecutive days. Oh and the things I was going to donate... still in bags in my bedroom. Ho hum.

Hoping that on this blog I can record/report on a few different things in my life.

I am a keen although not necessarily proficient quilter. I like to do scrappy quilts. I often design my own quilts and they are a bit organic... I don't always plan them out before I start which is why they are sometimes more scrappy than I intended. This last year I have also gotten into making banners (wall quilts) to use in our church to augment our worship time. These have been more along the lines of art quilts than anything else I have attempted before. I have been really encouraged in this by our minister and good friend Suzy who has always been delighted by my attempts and gladly used them. 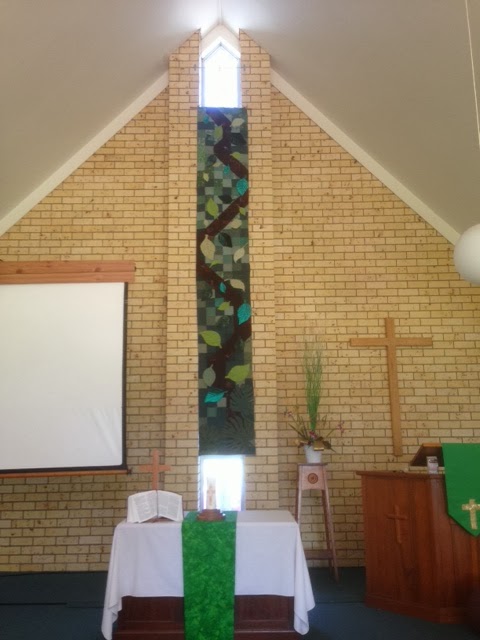 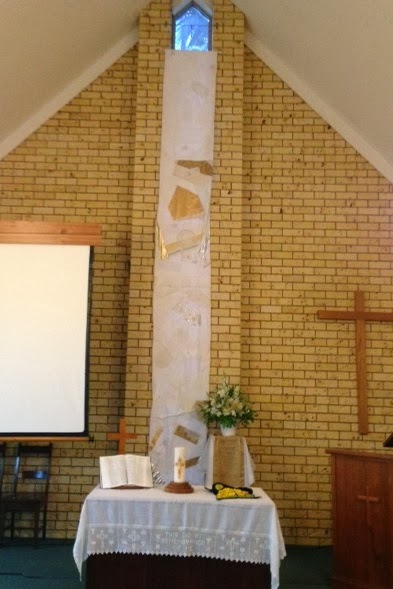 The banner on the left was made for ordinary Sundays (green) It features a vine winding from the bottom to the top with appliqued and 3D leaves. The banner on the right was done in 4 crazy patch panels in white and gold for the seasons of Easter and Christmas.


An going project for me is making baby quilts for my great nieces and nephews who seem to be coming along with increasing rapidity. I am one of 8 children and my mum has 24 grandchildren and at last count 18 great grandchildren with one on the way. I also make quilts for some other babies in my life - grandchildren of good friends, a cousin's grandchildren and a few babies at church. Keep me busy enough. My mum is 91 and still does embroidery. I trace pictures onto fabric for her and send them down to her (she lives in Sydney whereas I live in central Queensland) She completes them and sends them back and incorporate them into quilts.

I am planning on blogging about my quilting - my plans, my completions, my UFOs. 2 years ago I cataloged all my UFOs and determined to try to bust them. For a year I didn't start any new projects, I just worked on old ones (except when I had to make a baby quilt that I didn't have anything suitable on the go for) I also put myself on a fabric diet, only buying fabric that was needed to complete a project. I stuck with that pretty well (apart from busting out once at a Spotlight sale. I got fabric to make some baby quilts) I managed to knock over a fair few of them in the 12 months. I continued to work on them last year although I also started a number of new projects as well.

Again, inspired by Pam at HTBS I have started to track my fabric usage this year. I have set up an excel spreadsheet (ok Fangirl set it up at my request) and hope to calculate my fabric usage and my fabric acquisitions. I hope to report on it regularly... perhaps monthly... unlike Pam I don't complete a project or several projects a week so there won't be that much movement.

Inspired by podcaster Pam from www.hiptobeasquarepodcast.com I took up running again. In 2011 I had completed the C25K running program and was able to run for 35 minutes. I let it all go though (my hips hurt, my knees hurt, it was too hard, there was no point etc) However I have restarted it and this morning I ran for 25 minutes. I have completed week 7 of the 8 week program so Monday will start again. My aim is to run 5 kms and to run in a 5 km fun run by May. Last year there was a Mothers Day fun run here in town but no word of it being organised this year (and I am not volunteering) There is one on Hamilton Island but my husband isn't enthralled by the idea of us going there (its beautiful but expensive) and when I remember the terrain (we were there for a wedding last Easter) yeah... maybe not (massive hill divides the tiny island and if we have to run 5 km we would have to go up and over that hill at least once) 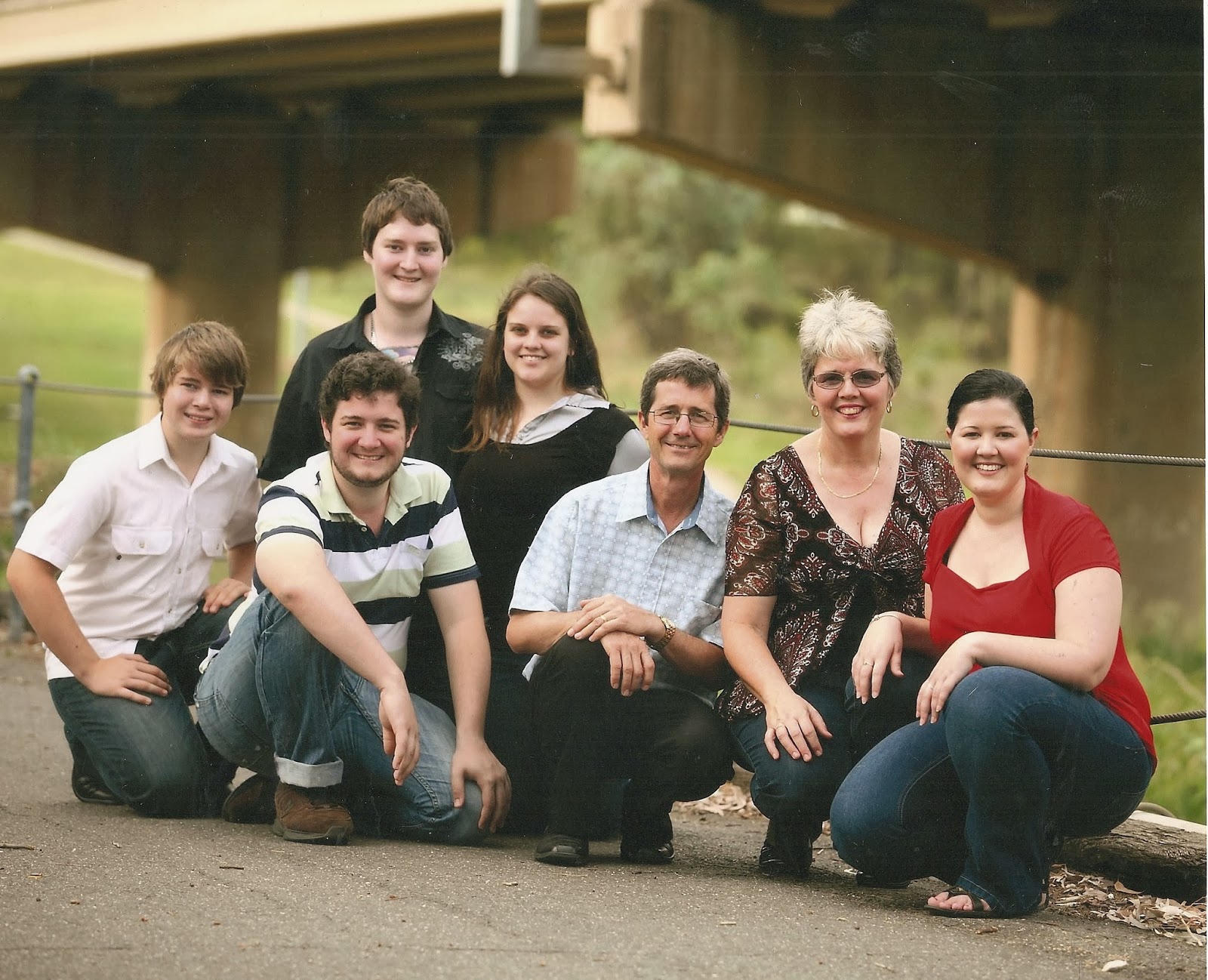 I am married to DH who is an engineer. We've been married for over 30 years now and still crazy about each other. We have 4 children. Daughter Fangirl (fangirlstitches.blogspot.com.au) who is an OT and has just returned to live in our home town after having lived in the UK for over 2 years (yes it is lovely to have her back in oh so many ways). Oldest son G who lives in Melbourne and studying to be a massage therapist. Middle son C, lives in Brisbane with his partner A. He is half way through a university degree to become a nurse. Youngest son S (my baby)  completed first year of an engineering degree 2013 but has decided to switch to education and become a teacher instead. C. A and S live together in our townhouse in Brisbane whilst they attend university.

We also have 2 dogs and 1 cat, Dogs are Annie a 9 year old Australian terrier fox terrier cross, Jack a Jack Russell Shiatsu something else cross (he is tiny but thinks he is a rottweiler) and Pippin a 6 year old Siamese cross. 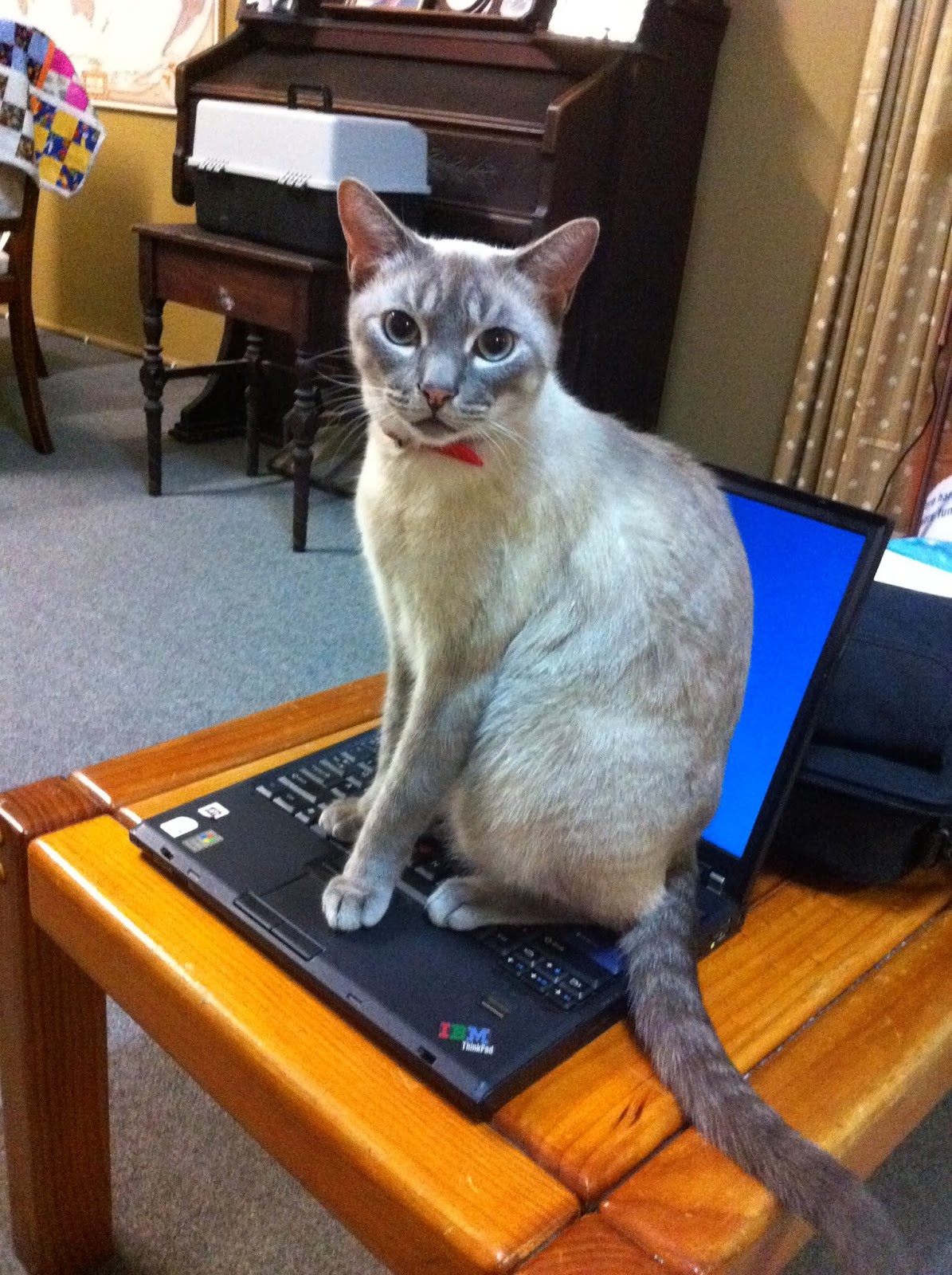 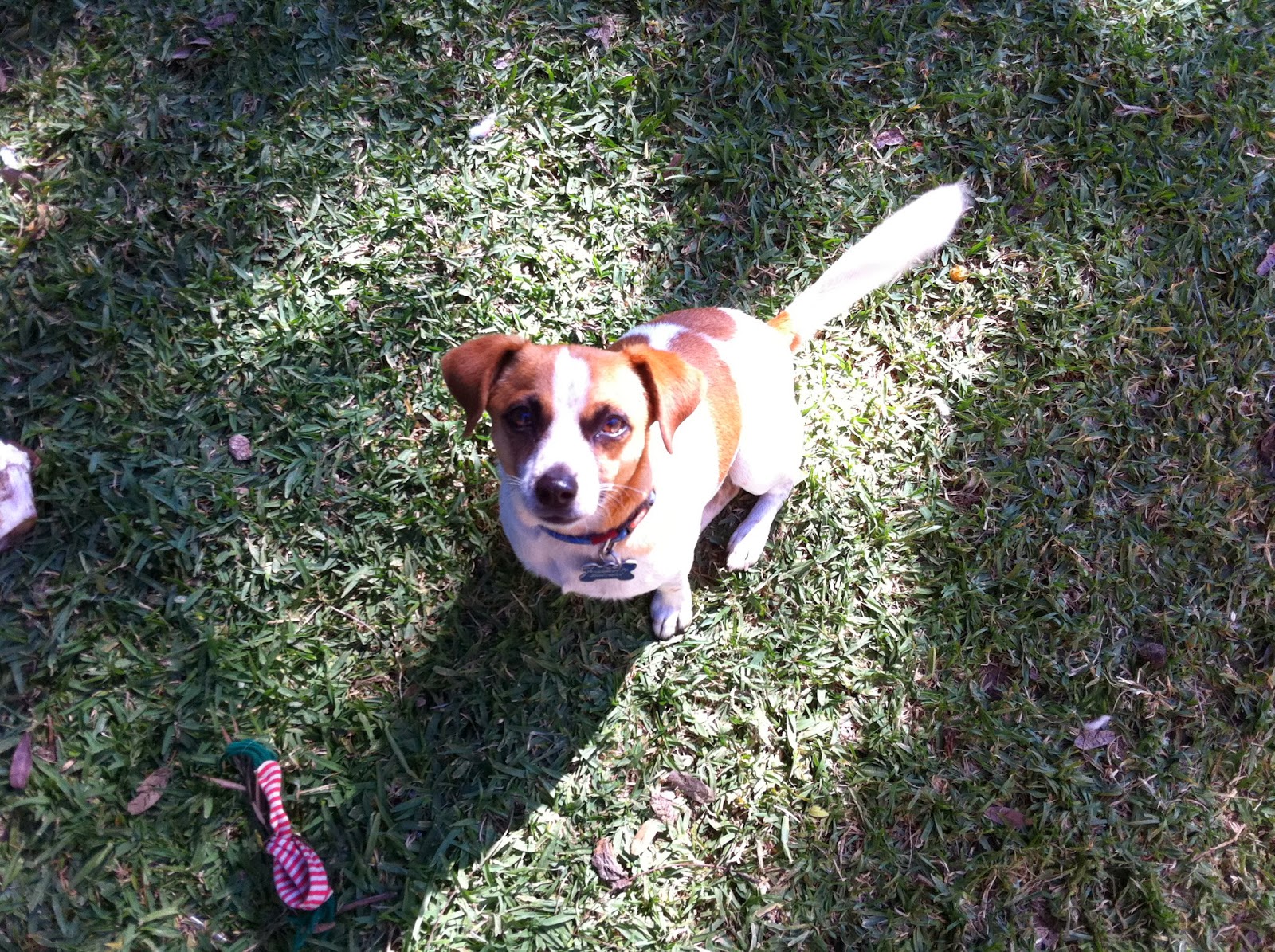 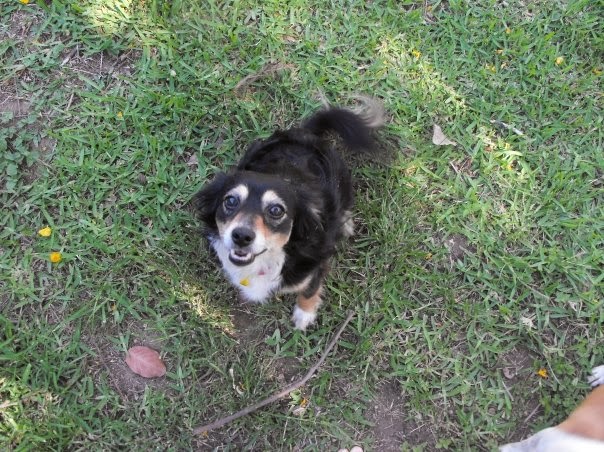 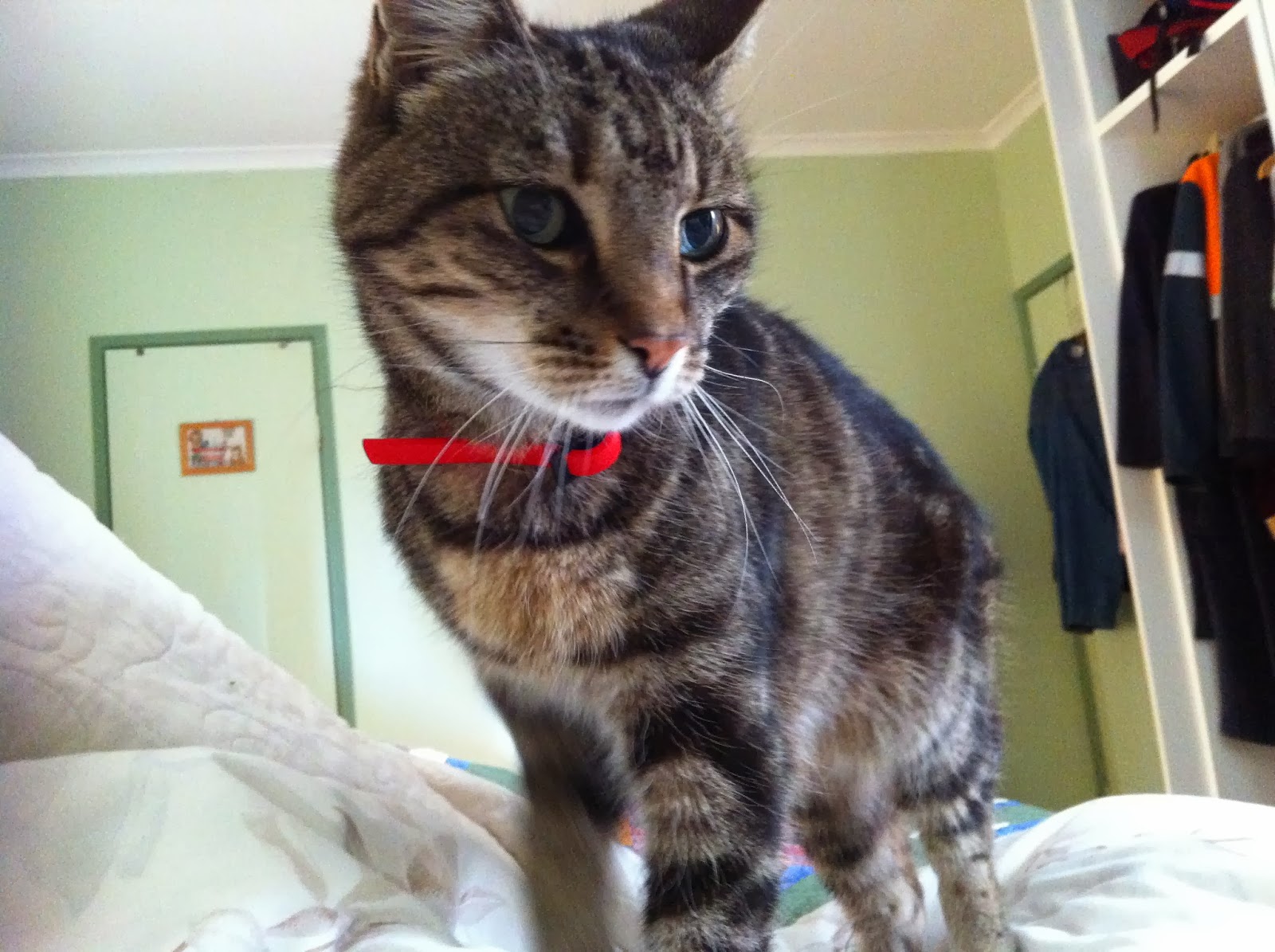 Tiger cat, mentioned in previous post died a year ago and we still miss her.

So there you have it. Its taken me several days to get this far and a visit from Fangirl to help me work out the photo uploads (my photos kept uploading sideways. All good now)
Posted by ozzypip at 6:12 PM 2 comments: