Family Reunion
This weekend we had a family reunion to celebrate amongst other things my sister Beth  and my cousin Syds' 70th birthdays. The invitation specified no gifts but I had made both of them a quilt. (I never could do what I was told) Actually I had embarked on the making of both quilts before the invitations to the party were issued but my story makes me out to be more of a rebel.

For my cousin I had made a tie quilt based initially on 14 ties that had belonged to his dad (who died in 1970) which were found in his mothers things when she died last year (aged 99 and 9 months) I gathered up ties from other family members, friends and from second hand shops. It was quite a mammoth undertaking but I really enjoyed the whole process. Firstly I washed the ties and then pressed them. I used iron on interfacing to stabilize the ties and stop them stretching out of shape. Ties are cut on the bias and so stretching can be a real issue. Then I made 25 crazy patchwork blocks using the blue and red ties from the 60 plus ties that i]I had amassed. I cut a 5 sided shape from the widest end of the tie  and attached it to the centre of a 14" sq piece of white fabric  (from an old sheet) I used a bit of fabric glue to do this. Then I built up the block with strips of the ties working my way around the shape till all the white fabric was covered. I trimmed the block to 13" square. I sashed the blocks with navy blue fabric and then put on a plain red border around the centre. Next I put on a piano key border using left over ties, red fabric scraps and fabric from my uncles old pajamas. I paper pieced the corner blocks so that the piano keys went around the corner. 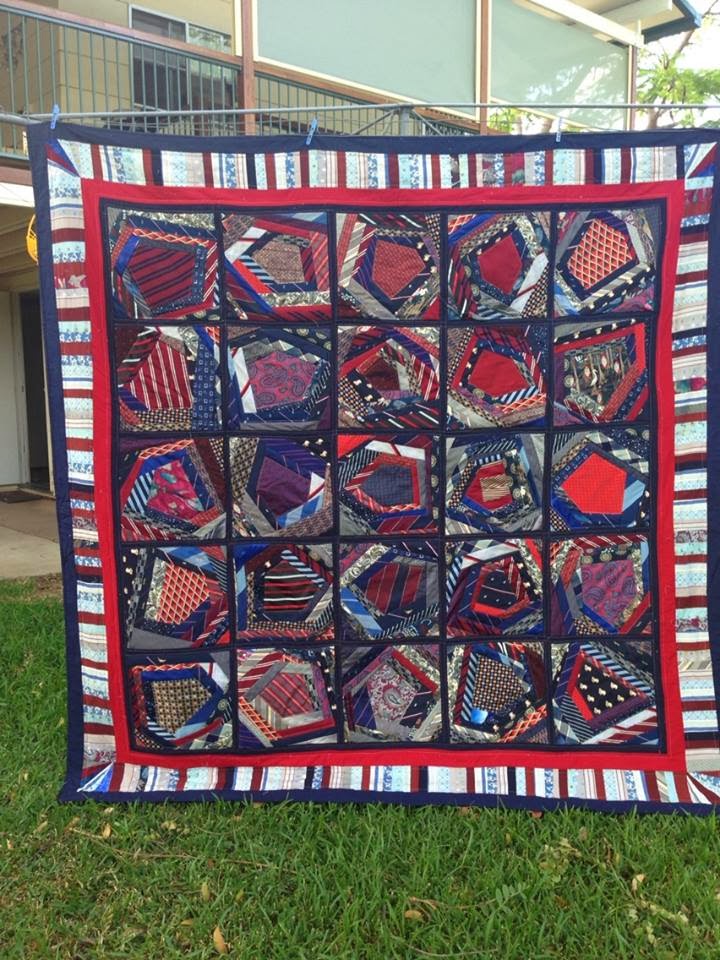 I thought that my cousin knew I was making the quilt for him but apparently not. He was stunned by it when I gave it to him and very appreciative. Lots of my extended family are on facebook so had been following the quilts progress as i had posted lots of progress pictures on Facebook and so they were delighted to see the quilt in reality. Their interest was most heartwarming. 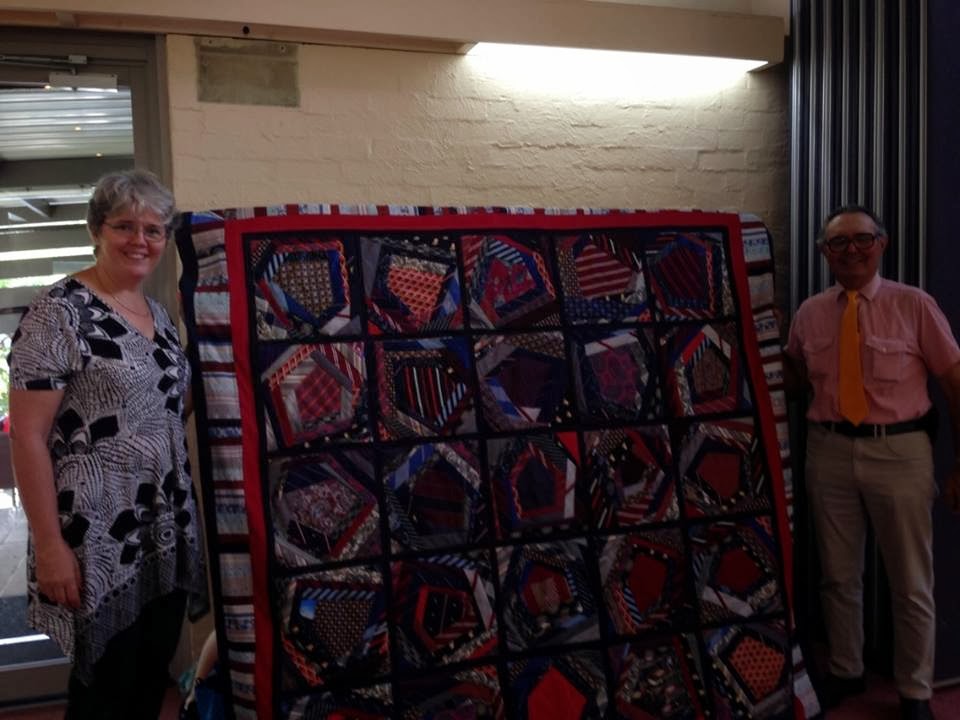 Syd and I with his quilt "Family Ties: The Ties that Bind"

The quilt I made my sister was a surprise to her. I made it using a variety of half square triangles from knitnitblogspot in green and brown fabrics. There were 16 blocks each from a different green fabric with a plain brown in the half square triangles. My sister was delighted with it. I stayed on with her after the reunion weekend and we looked at it in detail and i explained the half square triangle concept to her. She and her husband were fascinated by the variety of blocks that could be made from the one unit. Whilst my cousin's quilt (which I called  Family Ties:The ties that bind) featured heavily on Facebook my sister's quilt didn't get shown at all because she is my friend on Facebook. 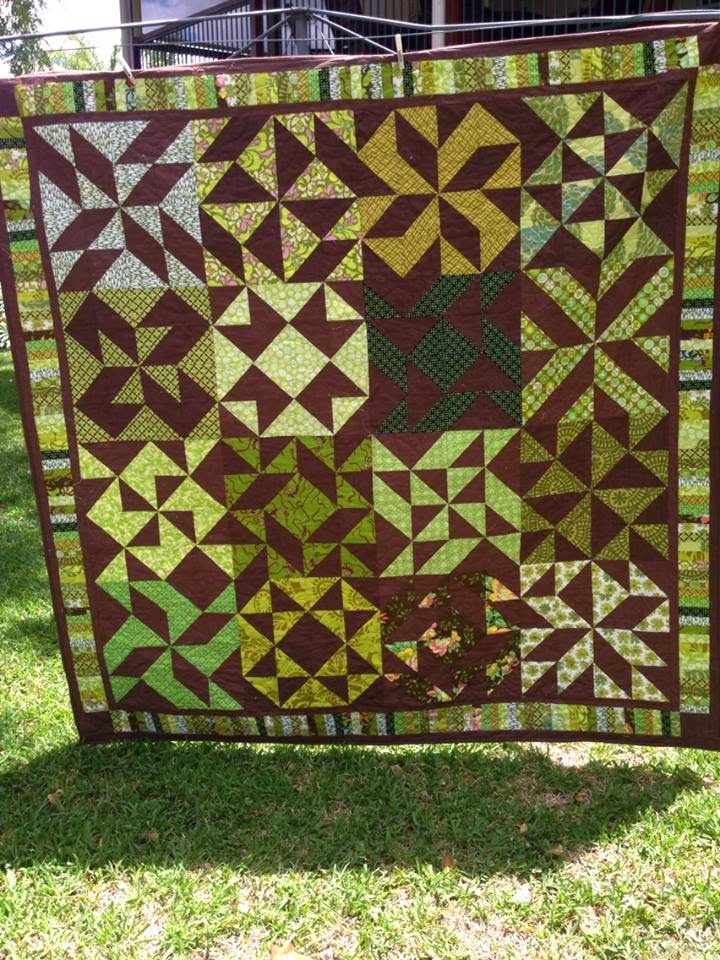 The front of my sister's quilt. It also featured a piano key border but no pieced corners this time 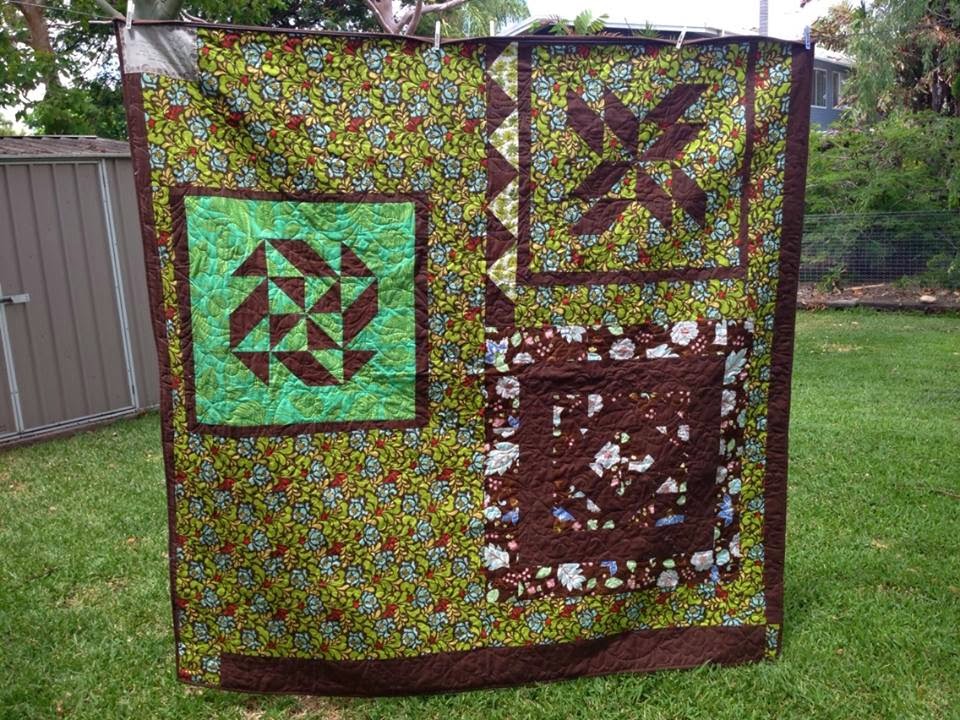 The back of the quilt. it took as long to put together as the front I swear!

My sister and I were discussing why I chose green and brown for her quilt. They are not her colours and don't feature in her current decor but they were the ones I was strongly drawn to when choosing the fabrics for the quilt. In discussion we remembered that 35 years ago, at the end of the 70s when I was living in Sydney attending teachers college and regularly visiting their home their kitchen chairs were lime green and the family room had a lot of brown trim in it. This was the period that I would have spent most time with them - visiting regularly, babysitting my niece and nephew, getting some family time. So we decided it came from then. She has already used it to snuggle under for a nanna nap whilst I have been staying here with her.


I also bought with me the quilt for my newest great nephew Lucas. He wasn't at the reunion but I was able to give it to his grandma, my sister J.
Posted by ozzypip at 8:28 AM