This week I was able to pack up my POD quilt - the front and the newly completed back - and send it to my friend Kym to get it it quilted.

I have also been working on some more little earbud pouches. I made 2 using Doctor Who themed fabric and then 5 more using some cute owl fabrics and then 2 using some sewing themed fabric. I am not really sure what I am going to do with them all. I have some recipients in mind and others I can donate to Handmade
Love.

The last thing I have been working on this week sewing wise has been the Hashtag quilt from the Twilters swap. I ended up with 31 blocks so one is going to have to be relegated to the back along with 2 left over ones of my own that I didn't send into the swap as they were undersize. I've laid them out on my design board. That is as far as I have gotten but it is a start.

Fixit Guy and I have both been very busy this week getting ready for our youngest son's 21st birthday bbq that we are holding at our place this weekend. We have been cleaning up the yard and generally getting ourselves organised. Fixit Guy and Boyo have been working on some rather impressive large scale decorations.

Can you pick my contribution? Yes I did the back drop and curtain. The fabric is pinned or clipped into place. Ideally I would have liked the black fabric to go further but I had to work with what I had!

I've also started making some of the deserts. Boyo asked for cheesecakes for desert - strawberry cheesecake. For his 18th birthday I had also made him cheesecakes for his party. I had trialedd 5 different ones in the lead up and he said he wanted all of them! I was happy to do that, thinking that would cover deserts for everyone but I had reckoned with out 18 year old boys who took a slice of each one... so we actually ran a bit short.

So this time I have told him that I am only making 2 different ones! Not as many people coming to this party either. This time I am making Turkish Delight Cheesecake as well as his requested Strawberry. (2 of each)

Last week in my WIP Wednesday post I wrote about how I was making a data base of all the copied sheet music our church had and sorting them all alphabetically etc. Well the job was finally done Friday. Jim, our minister, is really thrilled about having it done and has promised he will update the files as he adds new songs etc. Great! I still have to go through and add the songs that we have digital copies of (ie already on the Easy Worship data base) but that will happen... after the 21st birthday Star Wars extravaganza perhaps!

What are you working on this week? 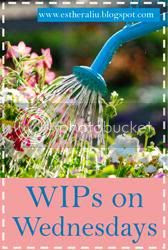